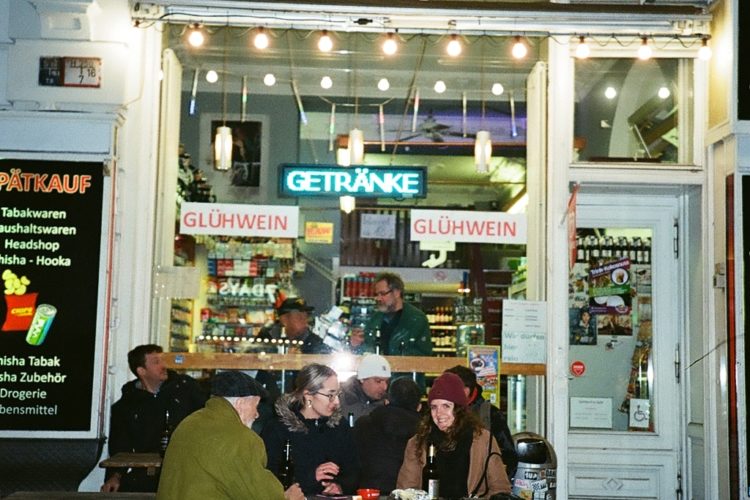 On the way to meet friends? Grab a beer from the späti. Coming home from a night out? There’s a nightcap calling your name from the späti. Need to wind down after work? 24 hours a day, your beer (or something stronger) is available from the spätis. Want to meet new people in your community or have a cheap evening out, fancy an afternoon snack and a cup of coffee, maybe you’ve run out of toilet paper or toothpaste? From pet food to a DHL postal service, you’ve guessed it … head to the Späti!

If you’ve never visited Berlin before you’d be forgiven for wondering what a Späti could be, but by now you’ve probably guessed that it’s a big part of Berlin life. Spätkauf’s (meaning ‘late purchase’), are small kiosk like shops dotted all over the city. Drinking is legal on the streets of Berlin and no matter what time of day it is you’re bound to see a Berliner walking by with an ‘unterwegs bier’ from the späti in hand. With most beers well under €2 it’s easy to see why.

Like snowflakes, no two spätis are the same. Some are smaller than hobbit houses, cluttered cubby holes crammed from floor to ceiling with a bizarre array of goods. The vast majority have tables and chairs outside, encouraging customers to take a break from the hustle and bustle of Berlin life and to sit for a moment and watch the rest of the world rush by. Then, there are the super spätis offering toilets and tables inside, a handful with beer on tap, and one called Drink Drunk that even brews its own brand of beer!

There’s over 900 Spätis in the city so wherever you go you’ll be sure to come away with an interesting story to tell and a cheap beer in your hand!