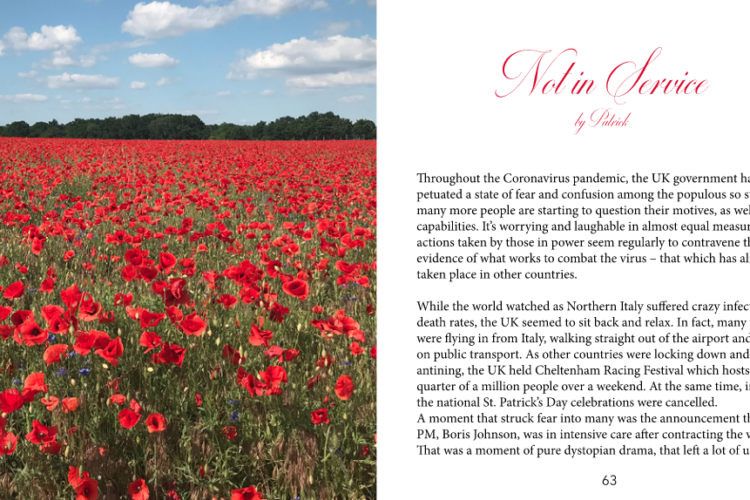 Throughout the Corona pandemic, the UK government have perpetuated a state of fear and confusion among the populous so strong that many more people are starting to question their motives, as well as their capabilities. It’s worrying and laughable in almost equal measures. The actions taken by those in power seem regularly to contravene the best evidence of what works to combat the virus – what has already taken place in other countries.

While the world watched as Northern Italy suffered crazy infection and death rates, the UK seemed to sit back and relax. In fact, many people were flying in from Italy, walking straight out of the airport and jumping on public transport. As other countries were locking down and quarantining, the UK held Cheltenham racing festival which hosts over a quarter of a million people over a weekend. At the same time, In Ireland, the national St. Patrick’s Day celebrations were cancelled.

A moment that struck fear into many was the announcement that the PM, Boris Johnson, was in intensive care after contracting the virus. That was a moment of pure dystopian drama, that left a lot of us with the feeling that the situation was genuinely severe. Thankfully he recovered after being given oxygen treatment in St. Thomas’ Hospital. Following that we had the resignation of the man whose predictions dictated the actions and beliefs of many people and institutions worldwide. If the UK population didn’t go into lockdown, the grim UK death toll churned out by Neil Ferguson’s pandemic model was 250,000. The man himself was then found to have broken his own advice at least twice as his girlfriend came over to visit.

As people across the country were forced to stay at home, businesses closed, and the UK saw a 70% increase in jobless claims. Those who managed to sustain their income were able to work remotely, or in ‘essential jobs’. We saw how many people could actually forgo commutes to the office and complete their tasks from home and communicate with colleagues via video chat. In the wake of this, the government, incredibly, saw fit to announce that they were forging ahead with the HS2 high speed rail service from London to Birmingham, at the cost of 100 billion pounds. It struck a resonant chord that they care more about their legacy than all the unemployed and suffering small business owners, now left frightened of both the virus and their economic future. Germany, on the other hand, rolled out their economic subsidy plans with smooth efficacy and government funds were quickly distributed to those who needed them.

Further questions arose as to whether those at the top believed the science or the advice they themselves eschewed, as senior political aide / pantomime villain / Brexit mastermind Dominic Cummings was found to have broken lockdown to drive from London to Durham. From his parents’ estate he then drove some 50 miles to spend the day outside in the forest with his wife and child. This totally contravened the rules that he himself had set and lead to many feeling outrage that they’d followed the laws and those in charge had flouted them. We were then treated to the absurd story that he was driving to the forest to test his eyesight to see if he was fit to drive back down to London.. The subsequent defence of Cummings’s actions by the second most senior cabinet member, Michael Gove, live on LBC, was a standout moment. He claimed that he had on a few occasions gone out to test his eye sight by driving his car with his wife. The total farce was complete.

The government stood by Cummings and defended his actions, whipping the media into a ten-day frenzy in which barely anything else was covered. We had four hour reports on TV of Dominic’s drive, while the country was left confused and exasperated as to what the actual situation was with the virus. What he did was undoubtedly irresponsible and offensive to those who followed the rules, but the media circus seemed nicely to cover up, momentarily, the huge problems going on in UK care homes, where death tolls were soaring. The media were at their usual games of witch hunting and creating division, while many people wanted answers to more practical questions of when they could expect to be back at work and back to socialising as normal.

There have also been fears of becoming an over-policed state, with the government controlling our movement and threatening stricter measures if faced with non-compliance from the public. We had the chief of police of Nottingham’s remarkable outburst that he was considering introducing road blocks and allowing his police force to check anyone’s shopping as they headed home from the supermarket. This was met with enough dismay and derision that he quickly apologised, but it was a case in point that if we surrender too much power, harsh rules may quickly come into effect. People were again left confused, this time as to why the contents of their shopping bags was pertinent to keeping down the spread of the virus.

The government press briefings used to show UK death tolls vs other countries that were suffering worse numbers. As soon as our figures overtook the rest of Europe, the numbers in other countries were not mentioned in the conferences. This kind of blatant refusal to take responsibility, or to treat the public with any kind of respect, has been such a frequent tactic with this government that it has almost been normalised. The UK talks of second wave of the virus coming in Autumn, while other nations in Europe seemingly have it under control. Their government’s messages are generally positive and upbeat, and where they have made mistakes many of them have admitted it, notably in France, Sweden and even Norway where the numbers were really low.

As Germany was easing lockdown, almost to the point of a return to normalcy, the UK government were floundering and delivering further perplexing promises. The declaration that they’d have a world beating ‘test and trace system’ in place by the 1st of June was just such a silly claim to make, when other countries had already used this method so effectively to contain the virus and the problems in the UK continued to spiral.

The government latest ploy is the NHS app which, once downloaded, will establish if you’ve been in close proximity with someone who has contracted the virus. If so, you and all of the infected person’s contacts will be alerted and asked to isolate at home or get tested. Other countries have already stated they will be bringing in a similar system, although they will adopt Apple / Googles version. This leaves us with the mystery as to why the UK wants to use their own version, one that stores all the user data centrally, rendering it potentially accessible to the powers that be for whatever they may choose to use it for. Apple / Google’s App is said to be ‘decentralised’, meaning all the info stays on the individual’s device and therefore can’t be used (supposedly) for anything other than the prevention of the spread of the virus.

The contract for designing the app has been awarded to the same company who drove the Leave campaign in the Brexit referendum. This campaign is now quite widely recognised to have been won with a lot of misinformation and targeted social media ads, which were successfully created through data harvesting. If enough people are too suspicious to download this new app, it won’t work properly in containing the virus. Apparently, we need 50% of the population to sign up, which equates to something like 80% of smartphone users. Based on the lack of trust in this government, and the feeling that many civil liberties have already been compromised, 80% seems like a tall order. Some people may simply choose the Apple / Google product, making the chances of success even lower.

The Government’s response to the pandemic has caused fear and confusion. The lack of clarity with regards to the specifics of the rules has baffled some people. Those that tried to follow them stringently have felt betrayed by the behaviour of those at the top, with Cummings’ failure to admit wrongdoing proving an iconic moment. People have been left afraid to go outside for fear of catching the virus, and worried about their financial future. Some have seen their small businesses, that took years to build, collapse. The government’s ineptitude and failure to take responsibility is not all that surprising given the cast at the helm. Now we are left with a looming sense of a second lockdown, and an App seemingly designed for data harvesting purposes. Meanwhile Boris and co. continue to pat themselves on the back, asserting that they’ve handled the crisis with aplomb…

This article about the corona pandemic was written Patrick for our 2020 lockdown magazine, which you can read in full here:

If you’d like to join one of our upcoming journalism projects in Berlin please get in touch!

Related Articles
Working from home during the pandemic
Coronavirus lockdown: Hiking in Berlin
Lockdown – just get through it?